Pattern Recognition: An Under-recognized and Under-appreciated Challenge to Learning Mathematics 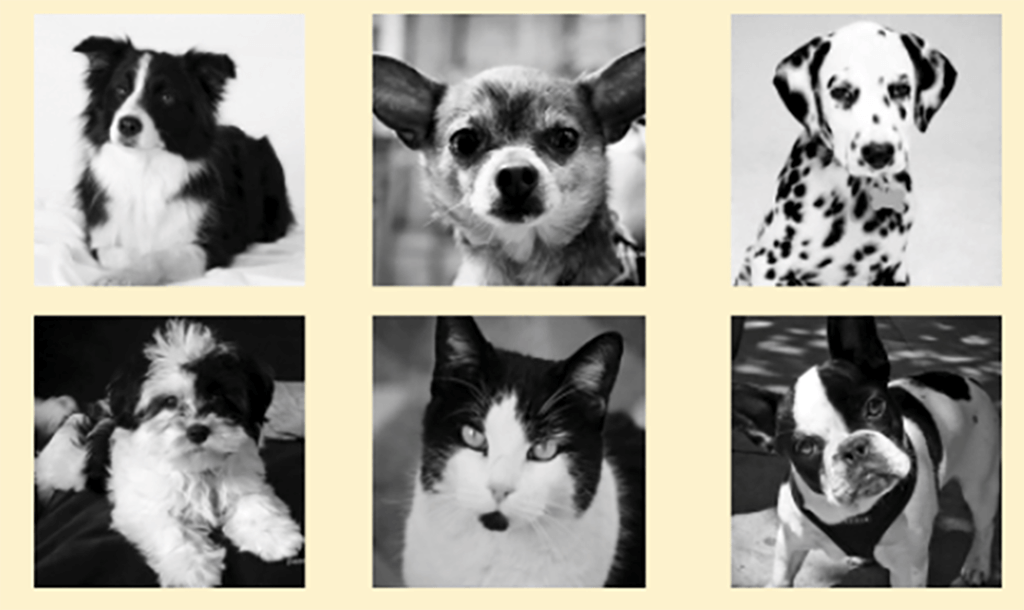 Most people know about the importance of both conceptual understanding (deeper knowledge, ability to apply knowledge to new situations) and procedural fluency (knowing the rules, the formulae). But most people overlook a third, critical component of math learning: pattern recognition.

Benjamin sits down to take an end-of-year math exam. Benjamin has diligently memorized all the formulae and rules that he learned that year. He opens his exam booklet and finds that he doesn’t know which formulae or rule should be called upon for each question. He sees a triangle in the first question, but there were many things he learned that year that applied to triangles. Which, of the many things he learned, applies to this question? Pattern recognition is at the root of Benjamin's problem.

Figure 1. Which one of these things is not like the other?

Look at the six images in Figure 1: Which is the odd one out? Almost automatically, you probably noticed that among five dogs, there is one cat. You are somewhat of an “expert” when it comes to the differences between the physical appearance of cats and dogs. You don’t just possess the knowledge of those differences, you see things differently.

Experts differ from novices in key ways. They don’t just have more knowledge, but after all the experience they have had, they “see” problems in their domain of expertise differently. That is, they more automatically recognize deeper structures, and can automatically focus on relevant features while ignoring irrelevant features.

In mathematics, given the equation x2 - 3x + 2 = 0 and told to solve for x, a student must first recognize it as a quadratic problem, rather than procedurally attempt to rearrange it so that all the x’s are isolated on one side. More broadly, many different problem types may look similar on the surface; many problems of the same type may look different on the surface. Before students can go about solving problems, they must first identify what kind of problem it is. This is an issue of pattern recognition.

Math teachers are content experts. They can see underlying patterns and structures in the math problems that their students have not yet learned to see. Pattern recognition is developed alongside conceptual learning; it supports and is supported by conceptual understanding. But pattern recognition also requires something else: massive exposure to different problem types. Experts have not only solid conceptual understanding, but they have also had experience with hundreds, if not thousands, of practice problems.

We often become experts over years, after many, many hours of practice. But, researchers at the University of California, Los Angeles, have found that supplementing traditional mathematics classroom instruction with rapid and varied classification problems can augment and accelerate student learning. While implementing pattern recognition training programs in middle and high school math classrooms, researchers found that when students were given a few extra hours of supplemental practice it led to large improvements in their math learning (e.g., the difference between scoring ~35% and ~65% on a final test) that were sustained, even four months later (Kellman, Massey, & Son, 2010).

The key elements that are important for training pattern recognition are:

Pattern recognition is an important component in mathematics learning; it supports both conceptual learning and procedural fluency. Yet, it is often overlooked in mathematics instruction. When we focus only on conceptual understanding and procedural fluency, we often focus on one concept at a time, as a way of trying to deepen what our students know about each concept. However, to prepare students for both their final exams and real-world applications, we need to also support pattern recognition—that students are able to rapidly identify key underlying structures and can flexibly draw upon their knowledge to solve problems.

We can develop this skill very slowly, in the hopes that students gain enough experience over a number of years, or we can accelerate development through intentionally designed practice activities that demand more complex thinking and recognition of patterns.